History And Economic Growth In The Twenty-First Century

Torquay is a beautiful place nestled on the south coast of Devon.

It is gaining immense popularity among the tourist for its exotic beaches like Cliffside Oddicombe and Babbacombe. This place is significant both from the archaeological aspect as well as historical. Torquay has been a home to ancient people since Palaeolithic time. You will be amazed to know that roman soldiers have paid a visit in the era when Britain was a part of Roman Empire.

This article will introduce you with the history and the economic growth that was encountered in the 21st century.

There have been major changes brought into the place. Historians have not found any traces of occupation this place before 11th century. Evidences have shown that as settlement was established by the Roman soldiers which are popularly termedas Torre.

The year 1196 saw the foundation of Torre Abbey and it is till now called the famous Premonstratensian monastery in England.

The structure and architectural features is owed to Sir George Cary in the year 1662. Earlier the half of the land of Torquay was occupied by Cary family but with the beginning of 19th century three families that include Palks, Mallocks and Cary have entered into the joint partnership of this land.

The presence of peculiar rock formations in the Kents Cavern indicates to the fact that the roman soldiers might be commanded by Legio II Augusta. In the areas of Newton Abbot and Totnes, coins that belong to Roman have been discovered and one can find the image of Emperor Claudius engraved on it. 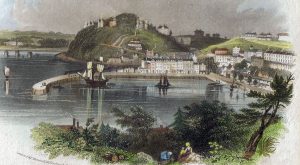 Golden phase of Torquay have begin with the beginning of the 19th century. During this period, Torquay gain popularity among the elite class of Europe and the town was visited by some of the eminent personalities. Villa Syracusa which is now known as the Headland hotel was built by the Romanoff noble family. This villa was mainly used for private entertainment of the royal family.  However, apart from the royal family, this place was given on rent to the visitors.

Well, this popularity was short-lived and with the advent of 1870s. The reason for such a situation can be linked to the preference of elite classes to abroad. They were more attracted towards foreign locations for spending their summer holidays. A lot of renovation works had been undertaken for bringing back the older fame to the town. For example Cockington was completely transformed into a villa-strewn suburb.

In the year 1870, the first baron of Haldon took initiative to built new harbour that became at once popular among the yacht sailors. A hub of changes was encountered in Torquay from 1896 onwards. One such development is the establishment of Recreation ground that conducted Rugby match and in fact, winter garden is another masterpiece. The beautiful glass and iron structures was ready to accommodate 1000 people. 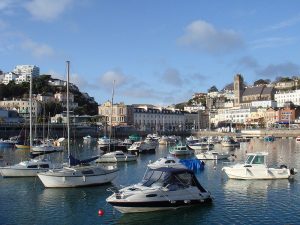 Torquay has undergone difficult time before reaching to the development phase that it possesses now. As per government reports, the town had registered a high rate of unemployment in comparison to other parts of the country. Mostly, the natives were employed in a holiday centre Pontis before it was sold off. One of the major developments that the town got which led to rampant economic growth is its tourism industry. The town is known to house some of the most attractive tourist spots.

This has helped the town to begin with their development phase. If we go on to the period just after the end of World War II will find that Torquay lost its importance to the tourists.It is only with the coalition of 23 broadcasting organisations from Mediterranean and Europe was formed at Torquay that it gained popularity.

The town gained its popularity again in the initial phases of the 21st century. It has turned out to be a popular site amongst the international tourists. In fact, foreign students came to this town for learning English language. With the growth of EU there were changes in the demography and migrant workers began to settle in the town.

Therefore, it can be said that a visit to this beautiful town will take to back to a golden era and you will definitely going to enjoy your holiday.